When A Stranger Calls reviewed by Jason

Here's a film review by my friend Jason Alley. Watch for more reviews from Jason and visit his page http://www.xanga.com/jason_alley 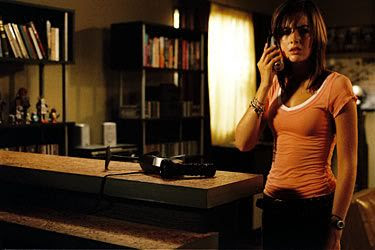 WHEN A STRANGER CALLS
1/2*
It's been many years since I saw some of the original 1979 "When A Stranger Calls", but I fondly remember being scared out of my wits as a kid. "Have you checked the children?" and "The calls are coming from inside the house!" are two of the most memorable lines of dialogue from my childhood. I'm not even sure I saw the entire film, and it's hardly considered a classic, but it's got to be better than this awful remake. It's directed by Simon West, who's already made three hideous movies ("Con Air", "The General's Daughter", and "Lara Croft: Tomb Raider") and stars Camilla Belle ("The Chumscrubber", "The Ballad Of Jack and Rose") as Jill, a teenage babysitter being hassled by scary phone calls. Imagine the excellent opening scene of "Scream" stretched out to an excruciatingly boring 83 minutes, and, like, not scary at all. Literally nothing happens for over an hour, and the running time is padded beyond all reason with annoying fake-outs, countless hey-what's-that-noise?-I'd-better-check-it-out scenes, even a friend who stops by for no other reason than to be murdered when she leaves. When the big "surprise" comes ("The calls are coming from inside the house!"), it's not even a surprise, because for 70 minutes we've been watching Jill do nothing but hear sounds in the house and walk slowly through dark hallways. And on top of how boring it is, it's absolutely forehead-slapping stupid on more occasions than I could possibly list for you. At first I thought it was going to be fun-bad, but trust me, it's just bad-bad. Stay away.
Posted by KLJ at 9:07 PM

I gotta tell ya Jason, I loved Con-Air

Boo! Ok, ok, I can understand liking "Con Air", but those other 2 are BAD!

Hey Jason! Congrats on the column. I'll make sure to put this film on my "don't see" list, not that it was ever on my "must see" list but, now I can sleep nights knowing I'm not missing anything! Whew!

Thanks Sid! Thanks again for getting me into the "Cache" screening - that movie kicks ass.