Some shit happened in 2013, and I tweeted about it

NY and New Jersey a mess after Hurricane Sandy
Republicans Peter King and Chris Christie decide Govt. shouldn't be TOO small. Want govt. in their business a little bit.

Pope quits, which is some shit that doesn't happen
The Pope was in the middle of trying to live tweet the Grammys when he just said, "Fuck it! I'm out.

The Pope is trying to quit. They're gonna kill him now right? Or is that the other big criminal organization based in Italy? I get mixed up.

Chris Dorner murders LAPD so LAPD murders him back
If he is wearing an "I'm not Chris Dorner, don't shoot me” t-shirt I will be impressed.

GOP responds to getting 0% of the minority vote by rolling out a minority member to explain their anti-minority policies.

New Pope got off to a rough start:
New pope: gay adoption = child abuse. So gays who want to adopt can rely on the church to pay all their legal fees?

When they announce the new Pope, everyone reply "Why not Zoidberg?" 'kay? It'll be HILARIOUS!

Justice Scalia leaves an empty seat on either side of him while gay marriage is being discussed .

Paula Deen loses her job for being racist. SCOTUS guts Voting Rights Act.
Well, at least it looks like we're winning on TV.

Wendy Davis' amazing filibuster in Texas
Now they're chanting Wendy Wendy Wendy and I don't think its because they want square hamburgers. #standwithwendy

Gay Marriage legal in CA
During my plural marriage do we burn the bibles before or after sacrificing the goat? Not the goat I'm marrying, a different one.


Obama says if he had a son, he'd look like Trayvon Martin, Right Goes Crazy
When rich white guys accuse a black guy of "starting a race war" I'm not sure which part is funniest but the word "starting" ranks high.

Ben Afleck cast as Bat Man, internet goes bat shit crazy.
My daughter cast me as The Friendly Dog Catcher, nobody much cares.

McDonald's Announces return of Monopoly Game
You could win a million dollars, but you're more likely to get diabetes and heart disease.

Govt. Shut down
Canadian born Ted Cruz is causing me to question my normally progressive views on immigration.

Cruz did not best a 24hr 18 minute filibuster against the 1957 civil rights act & so fails to be AS big an asshole as Strom Thurmond, barely

Obamacare.com stumbles in beta version
If a government capable of such sophisticated conspiracies can't put up a proper website, only one conclusion to draw: Libertarian Hackers!

Wait, so the govt. put up a website and it has bugs to work out? Unacceptable! This BS doesn't happen in the private sector!!!

Knock Out Game joins razor blades in apples, Satanic Ritual Murder, LSD in Temporary Tattoos and other scary things that never really existed
To know if someone has played the knock out game you tie 'em up and put 'em in water to see if they float...

Goodbye Mandella, Goodbye Lou Reed, Goodbye (and good riddance) clueless “Friends”
One nice thing about a celebrity dying is I get to eliminate a bunch of hack wannabe comics from my FB and Twitter feeds.

Marriage is Gay
So I'm seeing the results of gay marriage being legal! Turns out, if you legalize gay marriage... GAY PEOPLE GET MARRIED!

Wait, there are folks who DON'T believe humans can affect climate by polluting, but DO believe we can affect it by treating gay people nice?

Duck Dynasty
You support free speech but A&E isn't free to choose who speaks for them? Duck dude says what he wants, and A&E airs who they want. Free.

Hey, I don't have a TV show! All this time I didn't even realize I was having my free speech oppressed! NO FAIR!

That the duck dude doesn't understand the 1st amendment is about as surprising as his being homophobic.

WAR ON CHRISTMAS
There are no atheists in foxholes? You mean except for in the war on Christmas right?

I wasn't gonna do Santa with my kid but now... I think black, gay Samantha Claus may be leaving some gifts 'neath the tree

My boss: You shouldn't be listening to this. You don't believe in this. Me: You believe in Rudolph the red nosed reindeer?

Skynet goes live and kills us all
... 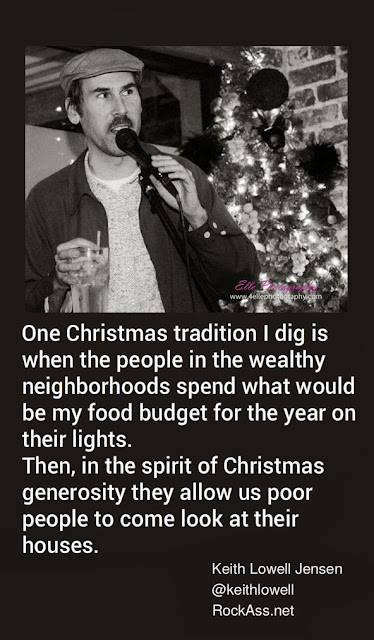 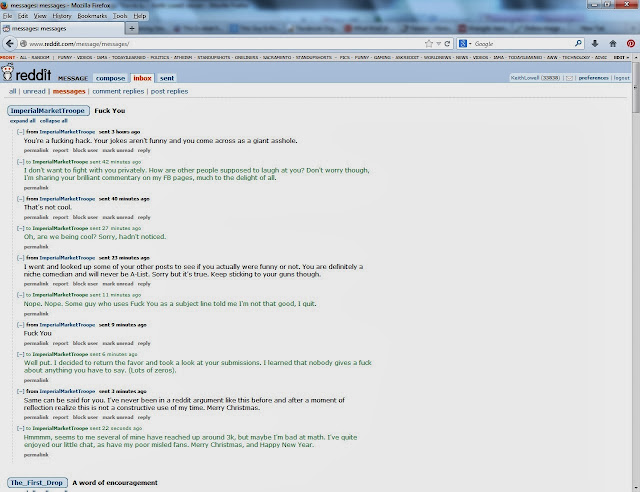 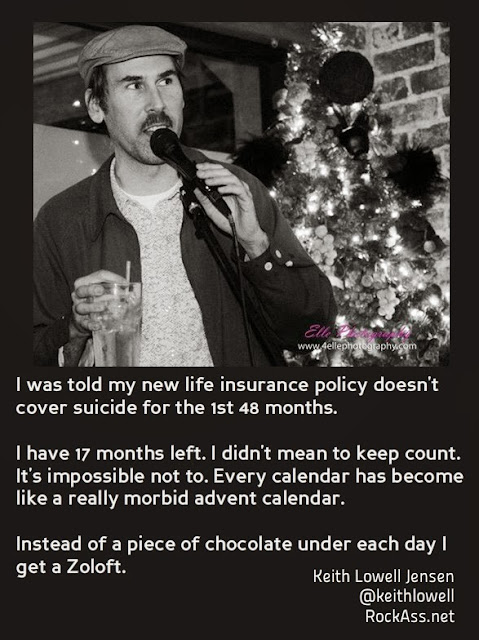 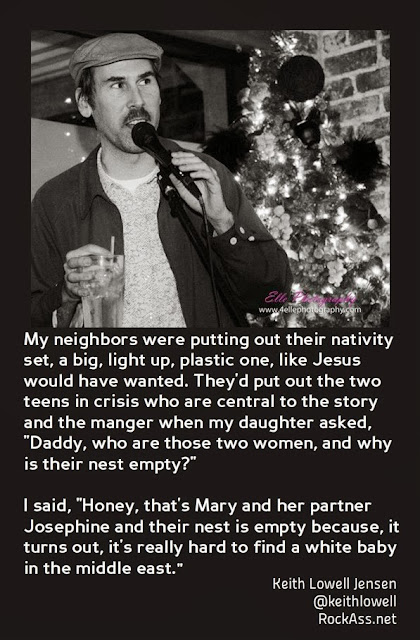 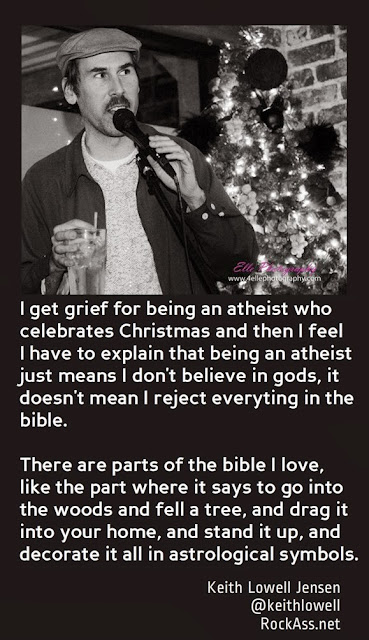 A Bible for The Kid!

Q: Is it okay if we get your daughter a bible with her name on it for Christmas? Asking because we don't want to disrespect your beliefs.

A 1: Sure. And hey, I have a copy of "Letter to a Christian Nation" by Sam Harris for your kid. I wrote her name on it with glitter, you know, for Christmas.

A 2: Oh My God! Have you actually read that book? SOOOOOOO not appropriate for children.

A 3: No. I appreciate the thought and even more, I appreciate you checking with us. We'd prefer to wait until she's a bit older than 4 before discussing how crazy we think pretty much everyone else is.