I was almost REALLY creepy 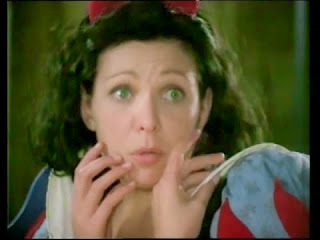 Freshman year of high school. I thought I'd be hip moving to the small town of Roseville, CA from Corona, CA. I mean, Corona was closer to LA, so it was pretty much a guarantee that I'd be the coolest thing Roseville ever saw right?

Here's the thing; The kids in Roseville didn't know they weren't hip. That's the way hip works. And instead of adoration and admiration I got a lot of, "Are you wearing army boots? Are you a skinhead? I didn't even know there were gay skinheads. Ha ha, faggit." My favorite Overheard In Roseville quote from that time is "New Wave girls are girls who are already ugly so it doesn't matter if they look weird." I was in hell.

It took awhile to make friends and when I did it was with the biggest geeks in school, and this is before geek was chic. These guys were the best though and I cherish the memory of getting muddy playing really intense games of capture the flag in the creek, where my boots seemed perfectly appropriate, helping Mike with his model railroad set up, and laughing our asses off watching Late Night With David Letterman during sleep overs. I'd resisted for years, but it turned out geek suited me.

That phrase sparked something in my brain. I had one of those “Moments of clarity” I've heard so much about. Looking at my lust filled friends I said, “Hey guys, I'm pretty sure that if we do this, we'll officially be really creepy.”

This White Guys Thoughts On Suey Park and #CancelColbert

My gut reaction was to find #CancelColbert ridiculous.

Then, as I read more I moved on to, "Oh, it was a misunderstanding. The joke was heard out of context."

While many people of color defended Colbert, there were enough condemning the joke, even after the context was clear, that I had the choice to either consider the complaint further or assume that THAT large a number of people of color either didn't understand satire and/or were hysterical and knee jerk and completely irrational. This seemed a poor assumption to make.

And while I considered Colbert's joke, I don't mean that I considered whether or not he should be cancelled (never Park's real goal) or whether he was intentionally being racist (I have no doubt his intent was the opposite) but wether it was a good joke or not, whether this particular joke might have been a miss.

This discussion went on in my brain. I may have talked with a few friends about it, but I did so privately. What I didn't do, was to immediately publicly condemn Suey Park and everyone else supporting #CancelColbert.

It seems to me that if an Asian woman finds a joke about racism against Asians (and about racism against Native Americans once context is added) offensive, the white guy should probably listen to her carefully and give her argument a lot of thought. The white guy should maybe not be SO quick to assume he knows more about racism than she does and should not be so quick to assume that she doesn't comprehend or that she is hysterical and irrational. When many other people of color feel the same, this is magnified. I feel like a white guy navigating discussion of racism might want to be slower to respond, more eager to listen, less cocky.

I am still not sure exactly where I stand, but it has affected the way I'll move forward with comedy about race. I feel like it will affect the way Colbert will move forward as well. What I do know is that whether I fully agree with Suey Park or not, the interviews I've heard and read that have actually allowed her to speak show us a very intelligent and thoughtful person. I have no doubt she understands satire and I don't have to necessarily agree with her to be glad that she is willing to push this conversation even against a huge effort on the part of many who rather than enter the conversation immediately seek to end it, often doing so with insults, threats, and other bullying. I am still a fan of Steven Colbert. I am now also a fan of Suey Park.

I hope that this incident strengthens the push against racist sports mascots. Imagine if the amount of energy that went into condemning Suey Park went into condemning the Redskins name and mascot, something I think Colbert and Park would both like to see come out of this.
Posted by KLJ at 10:04 AM 1 comment: