It's simple really.
Four comics, each makes a joke, and each comments on the others' jokes.
Graphics by Torch Davison 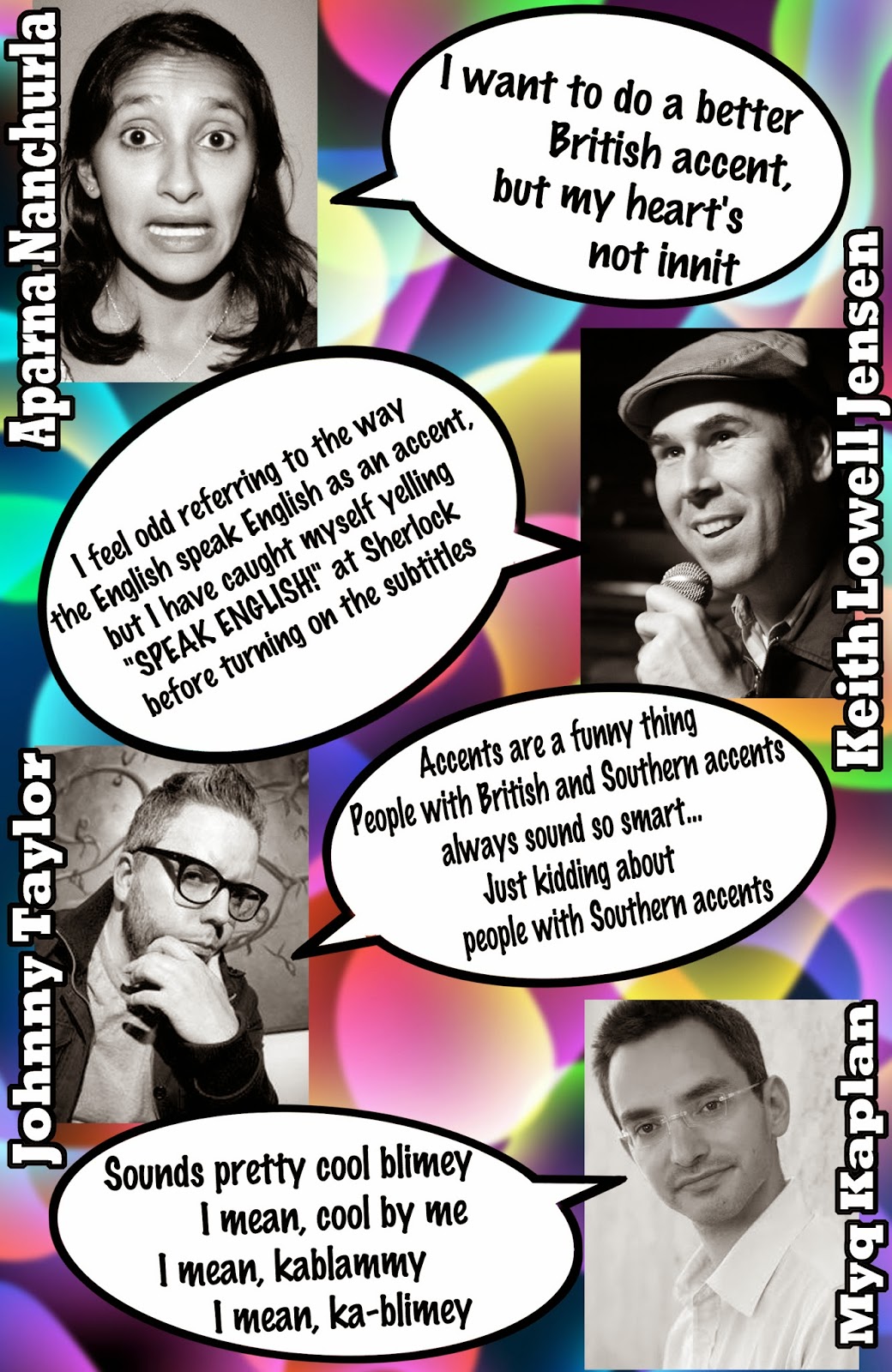 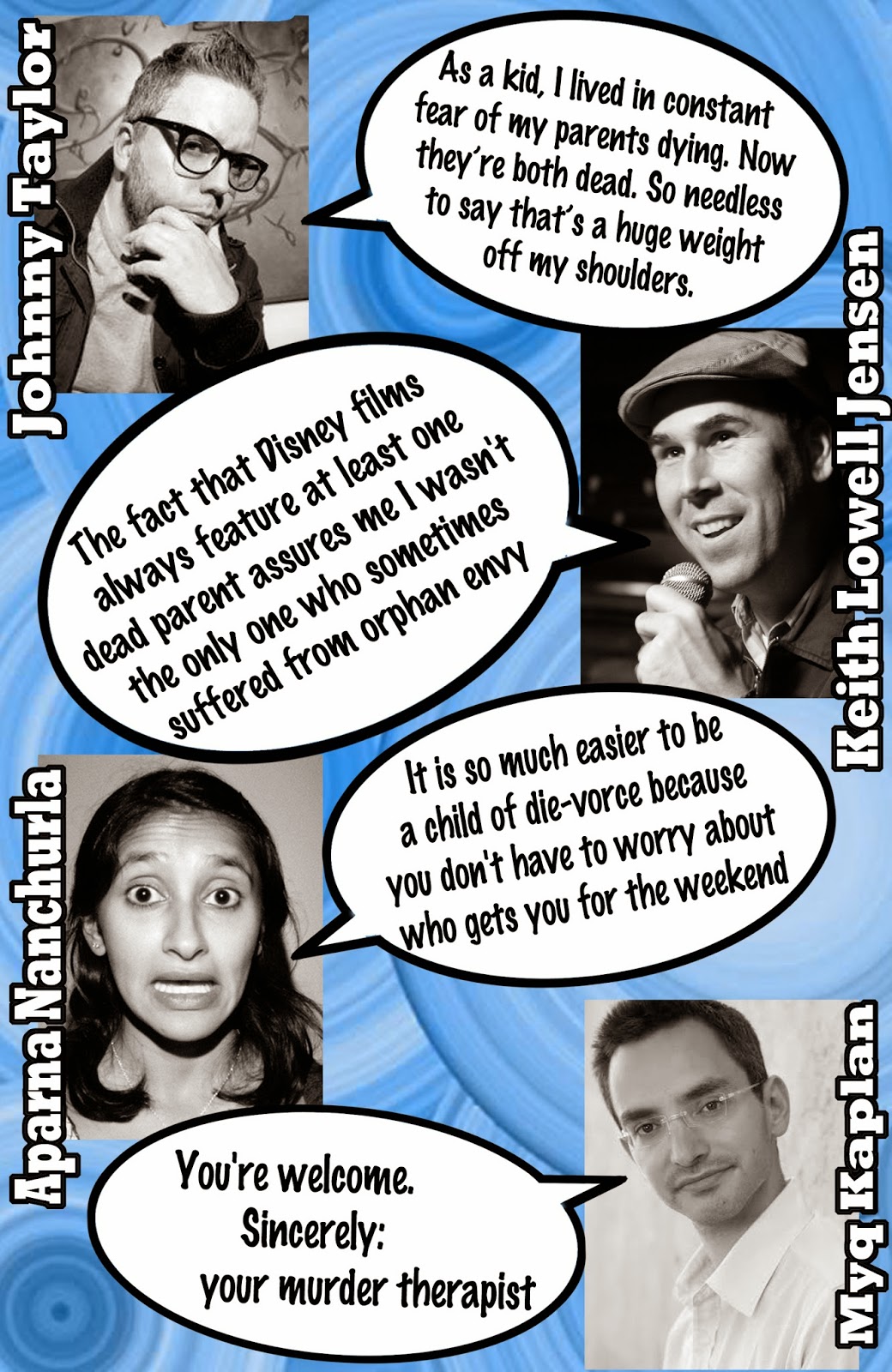 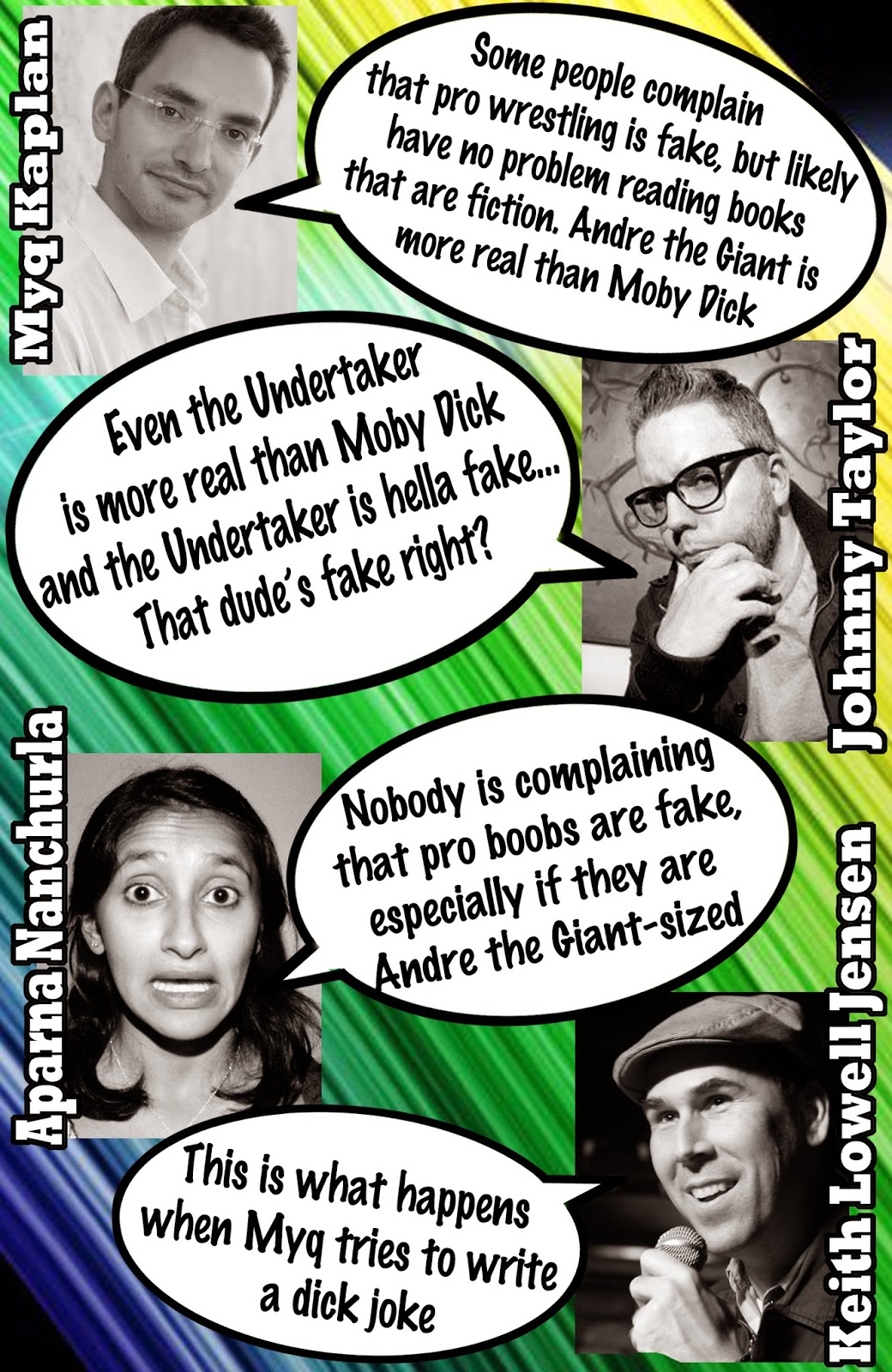 Don Geronimo, some guy with a podcast

I said that Don G and I crossed paths as he was on his way down. Then he got canned in Sacramento. He scrambled and got another gig quickly, in DC. He got canned from that one in record time. His brand of mindless negativity is done. Now he has a podcast. Dang, decided to skip satellite and go straight to a subscriber based podcast. Far be it for me to take delight in another's failing... HA HA HA, I'm SO taking delight in watching this dudes fail.
Posted by KLJ at 1:10 PM No comments:

Why I'm Not A Libertarian

My libertarian friends like to present themselves as the peace-niks, abhorring the violence of the tax man.

And I do see this violence. I see that they have no choice but to pay their taxes or people with guns will seize their property and/or incarcerate them.

I also see the violence strewn throughout human history of people hording resources and living lavishly while the masses starve, regardless of how hard they work. This phenomenon did not stop with modern capitalism, far from it. If it had, the “violent and oppressive” taxation, and wage and safety regulations would never have been necessary. People fought and died for these protections because they were so desperately needed.

So, given the choice between these two forms of violence, I see a clear choice.

Oddly enough this choice benefits those oppressed tax payers as well, as their position at the top is never more stable than when those at the bottom are well fed and cared for.

That said, I believe this first type violence that the libertarian wishes to avoid is in fact a fiction. The money they are made to pay tax on is not theirs. Do they really think it is? Would they support the right to pile it up and burn it? Money is produced by us, collectively, and it's value honored by us, all of us, collectively. It is a key ingredient in a system of resource distribution. They do not strike me as being forced to participate in this system against their will. They participate gleefully and masterfully benefiting from it more than anyone. They reap it's benefits, benefits never available so readily in any other system in human history and then they complain when they have to pay back into that same system and they call it violence. To put it another way, if you're making enough to be taxed, you're making more than has ever been possible for non aristocrats in any non-taxed system.

Do not be mistaken that I am stereotyping all libertarian's as excessively wealthy. The above character could be any tax payer. I am not a property owner, few people would consider me wealthy, but I am a tax payer and I'm proud to support the social safety net.

I do have two friends who are opposed to paying taxes because they disagree with the American military industrial complex (as do I), but they honestly opt out. They earn so little income the tax man wants nothing from them. They live in a one bedroom apartment. They produce amazing low budget films, paintings, and rock and roll recordings. They educate homeless kids. Their choice and protest strikes me as sincere and in stark contrast to the libertarian complaining that their home or vehicles could be taken if they choose not to pay their taxes.

Another popular libertarian canard is the lazy, freeloading welfare recipient. The real leisure class somehow offends them not a bit but the statistical anomaly that is the welfare cheat is exaggerated to represent a whole class of people.

A very important person to me got to spend her childhood not being homeless and malnourished because her mother had access to social programs. This mother may have made bad decisions at a young age or may have just had terrible luck, or perhaps a bit of each. Social programs allowed her to continue to feed her kids, all four of whom are now self sufficient adults, while allowing her to go to school and eventually become an amazing special education teacher who benefited our society greatly, while also earning a living and paying back into the system that caught her when she slipped and fell. Sorry if I end on a personal and emotional appeal but it is personal. The people who would face starvation, and violent non-gated communities, and a lack of opportunities are the people I love and interact with everyday, and one of those people is me. Another of those people is my daughter. It is personal.

But you know I wouldn't leave you wanting. Here are some lovely numbers for you:
In 2012 more than 47.8 percent of families receiving food stamp were working (the highest ever), and only 13.2 percent were welfare recipients with no working adults, according to the US Department of Agriculture.
The USDA reported that, "76% of SNAP households included a child, an elderly person, or a disabled person. These vulnerable households receive 83% of all SNAP benefits."
Of our uninsured families, 78 percent have at least one working person in the family and 62 percent have one or more individuals working full time.