Okay, So I Suck at Fundraising

Started a KickStarter page to get the funds needed so we can finish The Coexist? Comedy Tour movie. If you're in the dark, The Coexist? Comedy Tour was a tour made up of a Jew, a Muslim, a Christian, a Hindu, a Budhhist and an atheist comedian, the atheist being your's truly.
I pushed the fundraising for a couple of days, got insecure about it, got distracted by many, many gigs during the month and now... we have just over 2 days left. BUT WE CAN DO IT!
Since I started barking for money again an hour or so ago we've raised over $1,050.00.
Before I go on, here's the link. There's a cool video, have a look see.
https://www.kickstarter.com/projects/larrybrand/the-coexist-comedy-tour-documentary-film

KickStarter starter works on the idea that LOTS of small donations can allow big things to happen. We've had everything from $5 to $1,000 donations. Most important though is that people not just donate but repost the link, share the video, use Twitter and Facebook, etc. to help us reach the most people.

I REALLY want to see this film happen. I hope you can help THANKS
Posted by KLJ at 9:43 PM No comments: 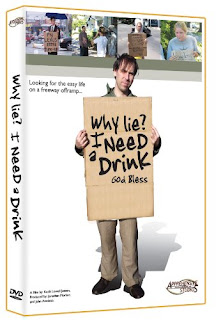 I'm thirty eight years old. I've never been embraced by the kids I considered hip kids, not when I was a kid and certainly not now. For the most part I realize that hipster is a relative term but the people it's assigned to tend to be gentle, artistic creative types who may think they're better than you or you may be projecting that because of your own insecurities about bold fashion choices and artistic risk taking. I think of the rednecks telling the hippies to cut their hair or the jocks who'd beat up punks just for looking weird. I've always liked "hipsters" more than I like the people that call them hipsters.

I was very pleased to find out my documentary was being reviewed by The Video Librarian. I'm still quite pleased at the mostly positive review. But I'm surprised, amused and a little disappointed at the reviewer's decision to describe me as "generically hipsterish". It seems journalistically lazy and as I think I illustrated above, inaccurate as well.

The reason I try to find humor while examining a serious subject probably has more to do with me being a comedian then being someone's idea of a hipster. My thinking was that a spoon full of sugar was needed to make the medicine go down. I highly doubt this film would be getting the notice it's getting if it featured a mostly unknown comedian with no budget taking a hard, serious look at panhandlers and the myths that surround them.

You can read the review here: http://www.videolibrarian.com/othervideo.html#Anchor-30228
Posted by KLJ at 11:27 AM No comments:

This is based on their current performances, which almost knocks Katt off as he's been eratic but he's hanging on. If this was a list of the best comedians still gigging based on their peak performances the list would be different. Emo Phillips would be on it for one and some others as well. 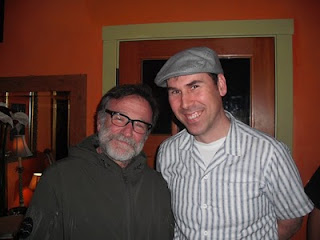 Mark Pitta called me on Monday as I walked home from a class I teach.

"Hey Keith, you wanna do a set tomorrow? Robin's going to be there."

Mark Pitta and Friends, every Tuesday at The Throckmorton in Mill Valley, is one of the best nights I've ever had the pleasure to be a part of and Robin Williams is a regular there so I knew right away that this was the Robin he meant.

"Oh, I don't know Mark, let me think... HELL YEAH!" I would've said hell yeah even without Robin being there, like I said, I love the Throckmorton.

I called him back a few minutes later to see if I could get a friend on the guest list as I need to bribe a ride and get my car in the shop. He must've thought I said guest SPOT and he answered, "Yeah, bring some new who can do a solid five."

I knew a guy with a solid five minutes who had definitely done the work to deserve such a spot. I called Nick Aragon and he called his girlfriend Rachel and off we went in her car, me in the back getting horribly carsick.

Robin Williams was already there hanging out when we arrived. We exchanged hellos, I was stoked when he said "Good to see you again." and then a minute later Mort Sahl walked in. Mark showed Sahl a "Comedy" puzzle he'd bought with every comedian you could think of on it, including Sahl and Williams. They all got a big laugh out of Fozzy Bear being on the puzzle as well, right next to Carlin. I thought that was the best part. Fozzy, Robin Williams, Edgar Bergen and the Unknown Comic were my first comedy heroes.

Robin helped Eddie Izzard get a foothold here in the states, and as the subject came up I asked him who the next big thing would be. He answered "Jamie Kilstein" without skipping a beat. Wow. Congrats Jamie. I was hoping he would've said me but he probably would've labelled me the next Eddie Izzard in that tv series about American gypsies where his accent was awful and nobody watched which would of course still have been amazingly flattering. 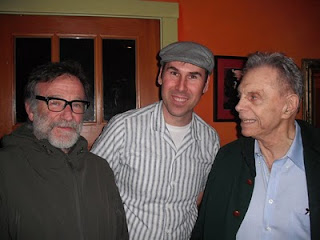 This pic with Mort Sahl cracked me up. It looks like I snuck up behind them and had someone snap a pic. Robin offered to take it again but Sahl seemed done with the whole affair so I let him be and got one with just Robin.

I, being one of the most liberal people you'll meet had the following exchange with Mort Sahl who was unaware of my political views:
Mort: The liberals are the worst. They've ruined this country.
Me: You think it's ruined?
Mort: (staring at me incredulously) Absolutely!

Nick did a killer opening set. Then I went up and did 20. My first 5 to 7 really killed, then things quieted to a respectable level and I closed strong with a good hearty round of applause on my last joke. I hurried out the backstage door, grabbed Nick and Rachel and headed up the balcony to watch Robin slay 'em in an improv with Mark Pitta and another comic/actor whose name I probably should know.
Posted by KLJ at 9:02 AM No comments:

My latest youtube video is getting a pretty strong momentum going and I just got linked on Reddit.com, where I was once described as a "Very gay Will Ferrel with Kermit The Frog's voice."

If you're on Reddit or if you'd be willing to register, please give it an up arrow! THANKS
http://www.reddit.com/r/atheism/comments/fgjr4/atheist_stand
up_comedian_keith_lowell_jensen/
Posted by KLJ at 9:14 PM No comments:

I read a great article on 5 of the most pervasive myths about former President Ronald Reagan and decided that in honor of the man's 100th birthday I needed to offer up my personal 5 favorite myths. I hope you'll take the time to read the original well thought out and well reasoned article here: wapo.st/dTMDJ8 after reading my hastily written and completely juvenile response. 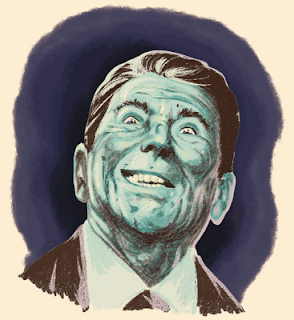 1. He Loved Jelly Beans. This was just a cover up for his delight in eating the hearts of baby horned owls, which can sometimes be said to resemble jelly beans.

3. He Had Fabulous Hair. While it is undeniable that the hair was fabulous I'd argue that the hair had Reagan more than vice versa. With apologies to Tom Robins I like to think of Reagan as fabulous hair's invention to transport itself.

5. Reagan was a demon, vampire and/or zombie. No, no, nothing so cool as that. He was just a greedy, selfish, xenophobic old man who would sell out even his own self serving ideals to the highest bidder.
Posted by KLJ at 12:11 PM No comments:

I didn't want to post any clips from the DVD/CD release Cats Made of Rabbits but I needed to get a new clip up for a festival I am trying to get into so, enjoy. And get ready to trade me your hard, cold cash for some more of this good stuff soon.