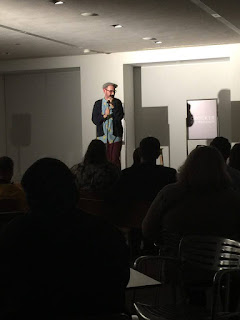 Last night Johnny Taylor Jr. and I performed at The Crocker Art Museum. Yeah, we fancy. At the early show half the audience was really into it, and the other seemed like maybe they were checking out stand up comedy for the first time, now that it was in a real center of culture and all.

In between shows, I was confronted by an older woman who told me, "Your jokes were pretty rough."
I asked her, "What do you mean by rough?"
"Well you were talking about penises and bananas with condoms on them and a little boy."
I said, "Woah!!! That is a gross misrepresentation of that joke! I told a true story about trying to be responsible, making sure my 13 year old nephew had information about safe sex."
"Why? Why would you tell a 13 year old those things?" she asked, with dismay in her voice.
"As I said in the joke, this 13 year old, we were led to believe, was sexually active. And it's just information. Kids should have information. I'm actually really proud of that joke and how graphic it is in the information it shares."
"You should have just told him not to do it."
"Not to do it!? That doesn't work! The people in those flyover states that we don't care about, they were gracious enough to do an experiment with abstinence only education and guess what, their teen pregnancy and STD rates are off the charts, but listen, I don't think you object to my comedy. I think we have a philosophical difference and you're mad that my act didn't cater specifically to your beliefs."
She snapped back, "You don't even know me!"
I said, "Yeah! Which is why it's so absurd for you to think my act was gonna be tailor made for you. Listen, you look around this museum. You're gonna see a lot of art, and some of it you're not gonna like and the artists... they're probably not going to care what you think. It's been a pleasure talking to you."

The second show we straight murdered.