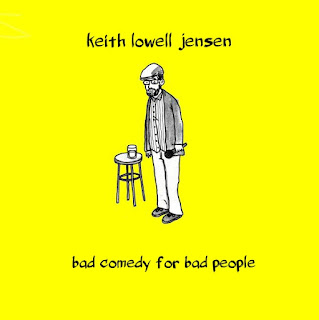 Bio: Keith Lowell Jensen has become known for his subtle, smart approach, and his meandering story telling. He has appeared on The History Channel, Spike TV, and The Starz Network, and has five hilarious comedy albums to his credit, with his latest, Bad Comedy For Bad People, hitting the # 1 spot on Amazon's comedy charts.

In May of 2018 Skyhorse Publishing  release the comedian's first book, Punching Nazis, and other good ideas, a collection of short stories, essays, and interviews centering around late eighties, early nineties punk rock and the bewildering presence of racist skinheads within that scene.

More Info:
Keith Lowell Jensen tells stories that are engaging, hilarious, and often poignant. His subject matter is largely autobiographical. In addition to covering his misadventures at school and in the workplace, the comedian has managed, over five comedy albums, to create an oral history of his daughter Max's life from announcing that his wife was pregnant on his first album, To The Moon, to reflecting on his daughter's love of trumpeter Dizzy Gillespie, civil rights activist Rosa Parks, and all the dragons you can imagine (and then some) on his latest, 2018's Bad Comedy For Bad People. 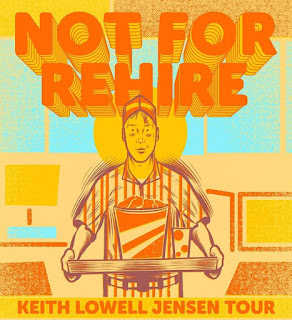 Jensen's latest live offering Not For Rehire follows his roller-coaster career path, from his time as a
range boy at a public golf course where he got paid less than minimum wage to the employer who started him in stand up comedy by shoving him onto stage in front of a large crowd at an animated film festival. More information on Not For Rehire is available here: http://keithlowelljensen.blogspot.com/2016/11/not-for-rehire-epk.html"

"Cats Made of Rabbits is every bit as deserving of your laughter as one by Jim Gaffigan or Louis C.K."
www.justpressplay.net

"A great listen, all ending in a wonderfully crafted story that reminded me of Woody Allen’s stand-up."
Aristocratii.ru (Romania)

And the Portland Mercury credits KLJ with saving a show.
www.portlandmercury.com/