A Story About A Meme

"I hate the word homophobia. It is not a phobia. You're not afraid. You're an asshole"

Many people think that Morgan Freeman said that. He didn't.

Many people think that George Takei said that. He didn't either.

Quite an impressive number of people think I said that. I didn't. Not quite. I said something a lot like it though on my album Cat's Made of Rabbits which was recorded in 2010 and released in 2011.

What I said, on a track called Adam and Eagle was: "...when someone wants to take other people's human rights or beat them up or otherwise act like dicks, stop saying their homophobic and letting them off the hook. I have no doubt they are afraid but that makes them sound like poor little scared bunnies. Poor guy, he's homophobic. No. He's an asshole."

In August 2012 the now infamous condensed version of it appeared on Facebook, posted by a popular page called The Beer Party. The description was very upfront about not knowing where the original quote came from:
Several people who were familiar with my comedy noticed the similarity and linked to my own FB page in the comments. A man name Todd Farally from The Beer Party contacted me and after we discussed my original comment and the graphic, which his wife Ardra Farrally created, he said "Very nice, and funny! It isn't exactly the same, but we can certainly say you inspired it." Well that was nice. He seems like a really good guy and I hope I get to hang out with him when I make it to Philly next. The graphic he'd posted was going viral. So... I decided it was time to get my own out there. I called my friend, comedian Eric Cash, and asked if he'd put together a graphic for me with quote. He did a beautiful job.
And, it went viral, as viral as anything I've been involved with anyway. It was shared many thousands of times. When Turner Sparks, a comedian friend who lives in China, wrote to tell me that he first saw Cash's graphic when other friends of his in China, friends who had never heard of me, were posting it, well, I was a little blown away. Then came Takei.

George Takei seems like a cool, funny, and driven kind of guy. I have come to really dislike the way he shares on Facebook. He doesn't just hit "Share" when sees a graphic, which would allow the original poster to be credited and linked back to. Instead he often reposts things saying "From a fan" or "Shared on my wall" or worse yet, he links completely un-credited and many people believe that he is actually generating most of the huge amount of content on his page himself. It is unfortunate. When you're a lesser known comic, writer, whatever, having a nod from someone like Takei could be a real boon. He has a huge presence on Facebook. Instead, I read tons of comments from people praising Takei for his cleverness. Takei posted the graphic from The Beer Party, giving neither them nor me credit. IN the comments section, along with the usual "Oh George, you're so clever" were also many, many, comments from my friends and fans, a really touching and impressive number in fact, stating that the quote had come from me, which it had, sort of.

Next up, Fake Morgan Freeman. 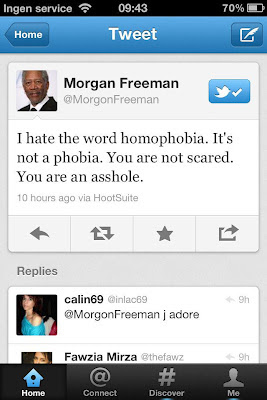 I was already writing very polite letter's to Takei asking if he might give me a nod, but now with the Freeman thing kicking into high gear. I was starting to feel like just giving up. Not that I wasn't having fun, I was and while I would have loved to have gotten as much credit for my jokes as others seemed to be getting for my joke, I was getting more than I had previously and I did appreciate that.

My friends and fans did not give up. Wherever they saw the quote attributed to Freeman or to Takei they posted a link to me. They also started to have a lot of fun making new graphics:

And eventually, I got a surprise. George Takei didn't reply to my emails or Facebook messages, but when he decided to put the quote, altered slightly, on a t-shirt, he credited me. 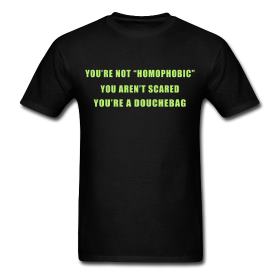 Many fans asked that I make a T-shirt out of the earlier Homophobia post.

I added a bit of my own take on it--I hope you approve, and don't take life too seriously.


He decides to put it on a shirt, and to give me credit, but of course can't be bothered to drop me a line. I find out about it only when people start posting this on my Facebook wall. Had he said, "Hey Keith, I agree the line is way similar to yours and I'd like to credit you. What do you think of my putting it on a shirt and not giving you a dime because I'd like to use the money for a show I'm working on?" I'd have said, "FUCK YEAH GEORGE! That's awesome. Thanks for the props! Got a part for me in the show? No. Oh, okay, but again, thanks."  That's not what happened. I wrote him a thank you note anyway and told him that I'm a big fan of his activism, which I am.

On August 16th fake Morgan Freeman gave me credit on twitter, both re-tweeting my post asking him to do so, and tweeting on his own to say that I'd said it, and that I was funny. I doubled my followers over the next week. Fake Morgan Freeman seems to have since removed this retweet and tweet. While researching for this blog entry I saw he'd posted a Jack Black quote. Didn't give Jack credit.

Creative people trying to find a way to make a living off of their ideas have always had the risk of having their material taken from them by bigger, better known creative people. The internet increases the chances of it happening to a lesser known comic like myself but it also increases the chances of a grass roots campaign helping someone like me get at least some of the credit for their quote if it goes viral. And it may help you get credit from whoever stole, borrowed, carelessly shared it as well which can be pretty cool. So all in all, this was a great experience. I had a lot of fun, and my comedy is reaching lots of new folks. The Morgan Freeman attribution continues to spread, though the pace seems to be slowing.

During the Republican National Convention, American Idol winner Clay Aiken tweeted a comment taken almost directly from me, with a bit of Mormon bashing added for good measure. Oh well. He can have it.

Sean Martin wanted to do it all, and he did quite a bit of it in a very short time.

We met when he invited me to perform comedy at a benefit show where his band was playing. At the gig, which he also produced, he started asking me about stand up comedy. Next thing I knew he'd become a regular at Luna's, a weekly comedy night here in Sacramento, getting quite good quite quickly.

Then he started sending me drawings and scripts and essays, partially as invitations to collaborate and partially to let me know what distractions were keeping him from stand up. All the while cancer and chemo were batting him around. He liked talking about his disease and treatment onstage, which is good, because he had to. As soon as he took the mic people were distracted by how thin and gaunt he was. He put them at ease with his illness, but didn't spare them the dark places in his jokes and stories.

I just found out Sean is gone. I feel bad for the times when his energy was too much, even for spastic me. Yeah, in the middle of dealing with this horrid disease and it's brutal treatment, he still had more energy and drive than anyone I can think of. I'll miss him. It was mighty kind of him to leave so much behind for us to remember him by. 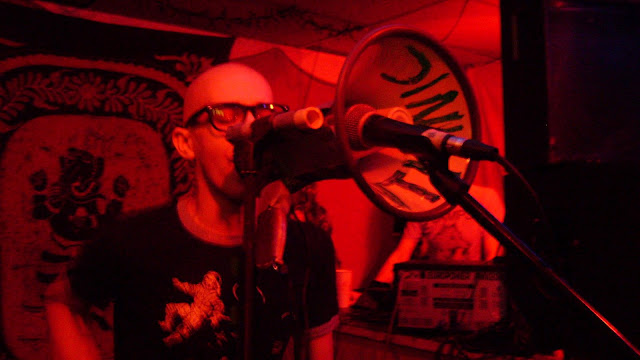 I will politely and respectfully continue to say that I think Islam and all religion is completely and totally wrong and is harmful to us all. Making that point as strongly and as eloquently as possible is blasphemous enough. I will not be provoked into acting like an upset child, name calling and throwing tantrums. I will continue to be friends with many beautiful, peaceful religious people even as I believe they are wrong, even as I hope that they will let go of beliefs that I see as irrational. I mourn with Libya as they have lost a great ally, a man whose name most of us didn't know before he died but who many, maybe even most, Libyans knew, appreciated and admired. I continue to wish the best for the revolution and I hope that they are able to beat the odds and gain stability.
Posted by KLJ at 8:22 AM No comments:

White Power Clowns On The Beach

True story. Once, while working as an emcee for Spike and Mike's Festival of Animation, I came across a down and out, and quite hung over, clown making balloon animals on the beach. I asked him if he could do dirty balloon animals. He said "Hell yeah!" and made me a teddy bear with large penis. So I brought him to the show that night where he happily made dick bears for an appreciative crowd.

At the end of the night, with a tear in his eye, he told me he'd made enough in tips to get his swastika tattoo covered with a tattoo of a hobo clown.
Posted by KLJ at 12:35 PM No comments: