Two new reviews from Jason. Be sure to check out his site for lots more film and music reviews. 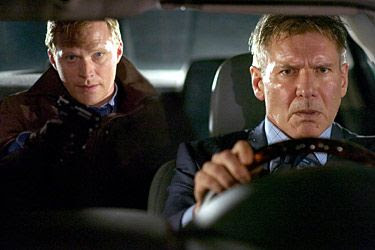 FIREWALL 1/2*
This generic, ridiculous, and altogether awful "thriller" has a pretty awesome cast, but mostly these actors just reminded me of better movies I'd rather be watching. Let's see, there's Virginia Madsen ("Sideways"), Paul Bettany ("A Beautiful Mind", "Gangster No. 1"), Alan Arkin ("13 Conversations About One Thing"), Robert Forster ("Jackie Brown"), Mary Lynn Rajskub ("Mysterious Skin", "Punch-Drunk Love"), Robert Patrick ("T2") and Carly Schroeder ("Mean Creek"). And of course there's Harrison Ford, who plays the character he seems to play in practically every movie he does: the loving and protective father who has to save his family from bad guys. Would it kill the guy to challenge himself with an indie sometime? There's no need to go into the plot - if you've seen any kidnapping/hostage thriller, you've already seen this movie, and probably with better dialogue.

The only entertaining thing about it is how Paul Bettany's character is named "Cox", and as he's mentioned in interviews, it's inherently funny because it sounds exactly like "cocks". Which makes a line like "Was he involved with Cox?" hysterically funny, especially when spoken in grave seriousness. 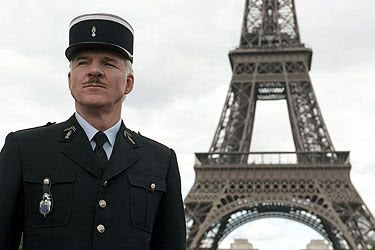 THE PINK PANTHER **
Steve Martin hasn't been funny since 1999 ("Bowfinger"), the trailers and commercials for this movie were horrible, and of course, there's the mere presence of Beyonce Knowles. So I was expecting nothing but the bottom of the barrel with "The Pink Panther". The good news is that it's actually not that bad, and is in fact pretty entertaining about half the time. Martin throws himself into the role of Inspector Clouseau (made famous by Peter Sellers) and is surprisingly successful. His goofy French accent is a hoot, and the slapstick is also well-done. (Most of) the supporting cast match him: Emily Mortimer is very appealing as his assistant Nicole, Jean Reno is fun as his partner, and Kevin Kline hams it up nicely as Chief Inspector Dreyfus. Then there's Beyonce. Playing an "international pop star" named Xania (way to stretch those acting chops!), she's terrible and we're forced to hear her sing twice. But her total screen time is only about 20 minutes - not quite enough to ruin everything. What eventually kills "The Pink Panther" is not the spirited performances, it's just that the story runs out of steam long before the end. It's not nearly as bad it looked, though, which is quite an achievement.