Here's another review by Jason Alley and he has more reviews at his site www.xanga.com/jason_alley 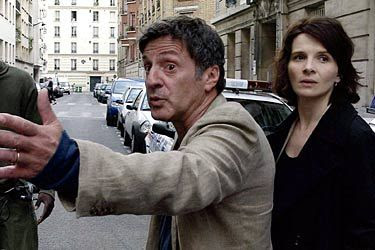 CACHE' (HIDDEN) ****
Austrian filmmaker Michael Haneke specializes in films that tear apart standard perceptions of family, class, sexuality, and society in general. His films (including "Funny Games" and "The Piano Teacher") are violent and shocking, but the violence always serves a purpose, calling for thought instead of just visceral reaction. "Cache'" (which means "Hidden" in French) is about a well-to-do French family who suddenly find themselves being watched by some malevolent observer. They start receiving videotapes on their front porch in which their lives are being taped from a distance. The tapes are often accompanied by disturbing, bloody drawings and strange phone calls. Eventually the tapes get more complicated, and when the family's patriarch, Georges (Daniel Auteuil), tracks down the apartment door shown in one of them, it leads him back into a nearly forgotten and unsavory secret in his past that he doesn't want exposed. 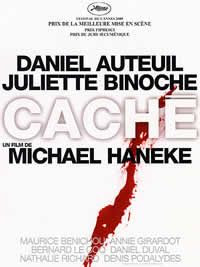 Thanks for posting that, dude - it's such a rad movie, you and Bryna should try to catch it when we get it.

I saw this on Wed and really liked it --i want to see it again just to study the ending...

Same here - before this, I can't remember the last time I walked out of a movie consciously THINKING really, really hard about what I'd just seen.

This just opened at the Crest, I can't wait to see it.

it's rare these days to find oneself completely engrossed when watching a film. but w/ cache, i, like many of the other folk left bewildered by the film, sat there while the creds just rolled on. i kept rewinding in my own mind to see what i might have missed. so i got the urge to come home and look on the net (hence finding this site) for some tidbits. and i realized that this film is just going to have to sit w/ me for a while...i think i'm just going to graze and chew on the fat w/ this one. but what a film! props to the director and actors.