I get onstage and I'm in the middle of my first joke and a woman starts talking to a man at the table next to her, but she is on the opposite side of her table, so she's yelling and just the audacity of it, to start yelling to some guy in the middle of a comic's set, it floors me and so I say, "Hey shut up." Not a great heckler put down, but then again she was not a great heckler.

Well she is livid, just appalled that I'd be so rude as to tell her to shut up when she's trying to have a conversation. She glares at me during the rest of my set, which does very well, I was really pleased with how some newer somewhat personal material went over.

I get to my last joke, a light pun that I want to close with and now she has gotten up and is talking to the dude again over in another part of the cafe, loudly.

I say, "Excuse me. Are you really still talking?"

She is oblivious to having become a part of the show again, does not realize I'm talking to her at all but as I get louder she has to lean in and put her hand over her ear to hear the dude she's talking to. And with that, I'm off.

Here is where it gets complicated. Her daughter works there. She was behaving this poorly while hanging out in red skinny jeans at her daughter's work. And her daughter yells at me, "SHUT UP!"

I keep going, I'm on a role, I used to work for Spike and Mike and haven't had a need/chance to flex these muscles in awhile. "YOU WANT ME TO SHUT UP? THE GUY WHO THEY GAVE THE MICROPHONE TO? THE GUY PLUGGED INTO THE SOUND SYSTEM, WITH ALL THE SEATS FACING HIM, STANDING ON A STAGE WITH STAGE LIGHTS AT A SHOW WITH HIS NAME ATTACHED THAT THESE FOLKS PAID TO SEE, HE IS THE ONE WHO NEEDS TO SHUT UP?"

Mom kept calling me an asshole as they huffed down the hallway. Each asshole getting a thunderous laugh. I took a deep breath, told the last three lines of the joke she'd interrupted, and said goodnight and THAT my friends is why you don't miss a single Comedy Night at Luna's.

10. Too believable. You're coming off too rapey. Some say the best way to fix this is not to tell rape jokes. This is what's known as The Rape Joke Paradox.
9. Liberal Left Wing Agenda.
8. Too many pussy whipped dudes in the crowd with their wives or girlfriends.
7. ABC's The View
6. You didn't yell the punch line loud enough
5. You didn't actually repeat the word rape enough times
4. They hate your freedom
3. Feminists have no sense of humor
2. They're frightened (and kind of excited) by your house arrest anklet
1. You're too nice.

Was gonna add "They're gay. They're fuckin' gay." But I realized that in Bro-Speak, #7 already covered that.
Also, I'm pretty sure Obama had something to do with it
Posted by KLJ at 10:10 AM 1 comment: 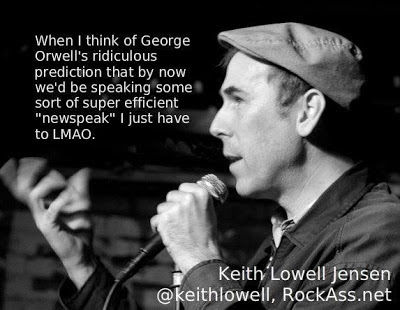 Who wouldn't want a big brother? 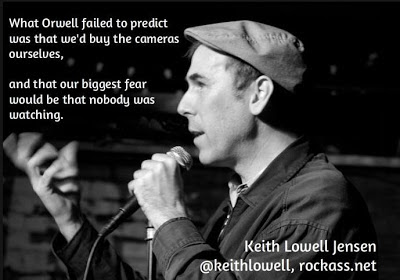 When I see a two dudes walking through Disneyland holding hands I do the right thing, I leave 'em alone. I just let 'em be gay at Disneyland in peace. But I know that they're being brave, and I know that they get shit, and what I WANT to do is run up to them and say, "Hey! I for one, am totally cool with you being gay! I think it's great! Here, be gay in front of my daughter. I don't mind. I love it. Look honey, see the nice gay guys, aren't they great!"

I know this would be inappropriate and I know it would get tedious having your Magic Kingdom experience interrupted repeatedly so you could help straight dudes address their hetero guilt (Is that a thing? Did I just coin that?) but wouldn't it also be kind of awesome? On some level? Maybe?

Couldn't there be something like what sports fans have? When my brother sees a Dodgers cap or a Rams jersey he comments on it and has this instant almost tribal camaraderie. I guess I just hit on why we liberals love bumper stickers so much, but then we feel guilty for driving. I could wear a rainbow flag t-shirt but that's false advertising and being a tease (cause we all know what I got going on is HOT!) and those "Straight but not narrow t-shirts" just seem a bit too close to saying "I'M NOT GAY! Not that there's anything wrong with that."

So, um, anyway, dudes holding hands at Disneyland, I hope you had a good time, and also you HELLA cut in front of us for Small World. Not cool.
Posted by KLJ at 11:28 PM No comments: