A new year, significant to us human types, but the universe at large does not, I would suspect, give a damn that we're calling the next one 2013. For the comedians in the universe who work in topical material, it can be a sad time. A time to say goodbye to some best bits as they become material from last year. And with that in mind, here are some of my own personal favorite topical jokes, comics, and photo-quotes that I put out into the universe in 2012. Note that any graphic can be enlarged by clicking on it. Dig.

Obama-care would require all employer supplied insurance plans to cover contraception. Some hollered that this was impeding their religious freedoms. Here is how I saw it:

Scott Walker survived his recall in Wisconsin. I wasn't prepared for that.

Gay marriage continues to steadily win over the heterosexual members of the populace as they realize it really doesn't affect them, and hell maybe it even helps...

The robo-calls were in full swing this election year. I got one asking me to vote for Mitt Romney. I wasn't rude. I just said, "Listen robot, I'm not gonna vote for that guy, I don't like him, but I totally appreciate you wanting to support your own kind."

We on the left prepared to fight like hell to keep Obama in the Whitehouse, so that we could get back to complaining about him...

Johnny Taylor was the guest writer of the Baby Killer comic if you missed that.

The GOP found someone to run against him who made it pretty damn easy to mobilize behind the less than perfect choice... 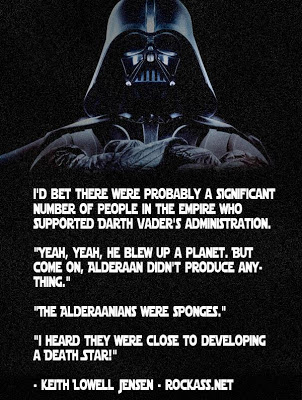 The best part of this joke was the response from Star Wars nerds arguing over who really blew up Alderaan.

The "Conservatives" got a bit radical as they saw the country slipping away, with secession petitions getting more news coverage than they deserved around the country... 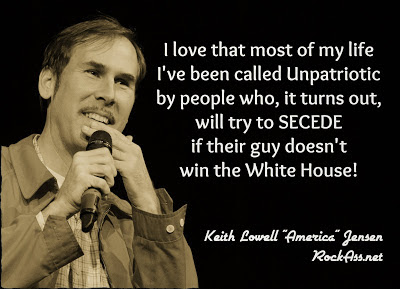 Weed and Gay Marriage made great strides seemingly everywhere BUT in my home state. What the hell? We're California dammit! Weed and Gay is what we're known for! Texas Governor Rick Perry said that Texans who like weed and gay (aka Austin) should move to California! California not Iowa! Freakin' Iowa! How does Iowa beat US at Gay?! 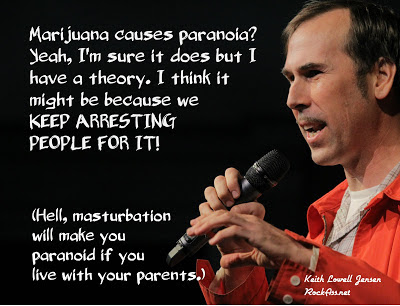 When the GOP chose it's Chairmen, I think they thought chair was the Latin word for white. They sure got the men part right though... 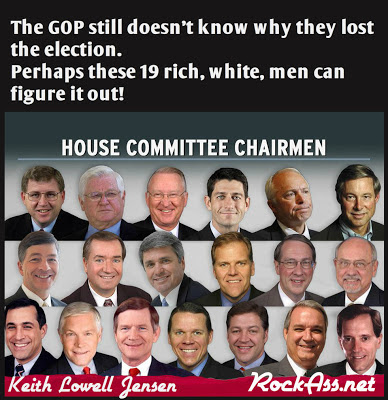 Disney bought Star Wars, and I wrote a joke that 4 people got. Those 4 people really liked it a-lot. 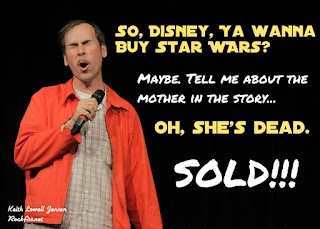 Oh, and the world ended also. That was cool. Turns out the afterlife is a-lot like life. Big ups to the universe on continuity, this shit was seamless. I published this on 12/20 as people in the US got excited that crocodile people were still around. 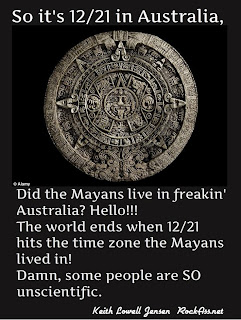 The year closed out with an awful tragedy. The NRA took a week before responding in any way to the horrible school shooting in Connecticut. I don't know what they did during that week, but I'm guessing miniature golf or something other than thoughtfully crafting their response. 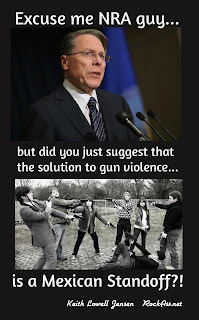 Another tragedy involving a child, guns, and the desire for an education took place earlier this year in Pakistan. This one had a happier ending though as Malala is alive, and still hitting the books! 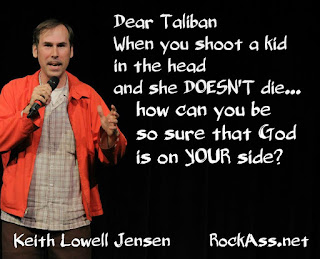 The best joke of 2012 certainly wasn't mine. That award goes to Newsweek. Not for the cover below, depicting a bat-shit crazy Michelle Bachmann, but rather for their response when criticized for using such an unflattering, hell unsettling, photo. They just published the whole photo shoot and said "Which one would you have used?" Well done Newsweek! 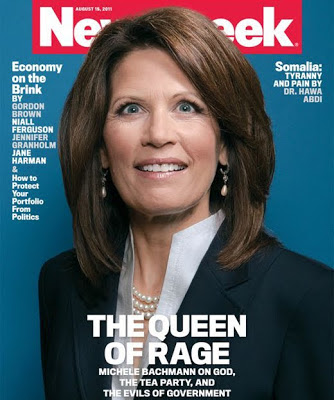 I hope you have enjoyed this quick peak back at a year that was pretty damn crazy. Here's to a progressive and productive 2013! If you'd like to see my comics and graphics when their fresh, and to catch the non-political ones as well, find me on twitter /keithlowell and Facebook, just search Keith Lowell Jensen, I have a personal and a fan page.Oh, and also check out The Beer Party on Facebook, they run my stuff frequently amidst lots of other liberal info-graphics.
Posted by KLJ at 10:14 AM No comments: 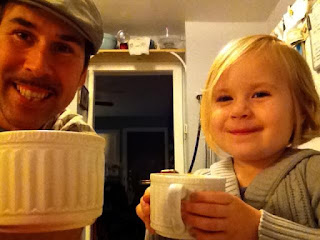 Maxine just blows me away with how bright she is, almost freakishly so. It feels like a huge responsibility having such a gifted kid. Her third birthday party went off perfectly. We had the Crest Theater all to ourselves for a screening of The Wizard of Oz for friends and family. Kids were up in front of the screen dancing and singing along. The best way to watch her favorite movie.

Bryna, my wife, is still putting up with me. We just barely survived living together in a VW Bus for two months when we started this relationship back in another millennium. I think it was good practice for living with a kid and three or four careers between us. I get the incredible privilege of being able to chase my dreams thanks to her support, both emotional and practical. I love her so.

Career wise this year was the best yet. I am traveling which is my favorite thing, even though I miss my family. I visited Ohio, Missouri, Kansas, Nevada, Oregon, British Columbia, Tennessee, Texas, and I was all over California like a cheap suit. Had the amazing experience of someone in the airport asking me where I was going and answering honestly, "I don't know."

I got to perform with Doug Stanhope at The Improv in San Jose for a packed house, had one of the best sets of my life and sold out of merchandise in the lobby afterward. That felt real good. Doug told me as I came off stage that he laughed more at my set than he had at any comic in a long time. That was the best part of all.

I also got to work with Robin Williams a couple of more times which is still a huge thrill. This awesomeness courtesy of The Throckmorton theatre in Mill Valley. Robin is warm, friendly, and every bit as wonderful as my younger self wished Mork would be. When I walked into a restaurant and Robin stood and called me over to tell me that he really liked one of my jokes he'd seen on  youtube, holy shit! Coolest thing ever.


But wait, there is more! The Coexist Comedy Tour documentary, at long last is finished and... well some stuff is happening. Stuff that will be huge news in my 2013 recap but that I'm not at liberty to discuss in detail quite yet. It'll suffice to say, you'll have plenty of opportunities to see the film in the coming year and it's fantastic.

I also got to appear on How The States Got Their Shapes on the History Channel, and with far less reverence for history, I got to appear as a red coat in a SMOSH video which let me shoot an old lady and get shot by George Washington. This made me a hero of more than one of my nephews. 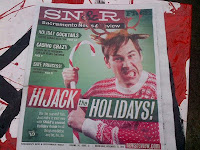 The News and Review treated me well as did their readers who voted me "Best Person to Make You Laugh". I was the N&R cover model for their Christmas issue. Luna's Comedy Night, my local weekly show in Sacramento continues to give me a great place to workshop and hang out with the great batch of comics and friends. I love this room and the people in it.

My sure thing joke this year, the one just killing every time and seeing me off stage with huge applause when I use it as my closer is a bit about a Catholic Priest coming to my door. I didn't write it. I almost never accept jokes from other people, but my little brother James wrote this one and it just kills too hard not to do it.

I tweeted "Dear Taliban, When you shoot a kid in the head and she doesn't die, how can you be so sure that God is on YOUR side." in response to the infuriating shooting of my young hero Malala in Pakistan, the girl who refuses to stop seeking an education. The tweet trended in India and was popular in Pakistan as well. I found myself with the rare opportunity to correspond with Pakistanis who are pro-Taliban and who are understandably distrustful of the US. Intimidating and amazing place to be.

I've got a cool new youtube project in the works being produced by Danielle Mandella, who you see pointing the camera at me and Doug Stanhope in the pic above. And watch for more collaborations with comic book artists because I do so love comics! Also looking forward to collaborating in the coming year with Johnny Taylor who I'll be touring with, and with Greta and Robin of Well Hung Heart who I'm working on a secret project with.

There were many other thrills, and too many great experiences with too many wonderful people to fit in one blog post. I love being a comedian. Here is hoping that in 2013 I do more comedy and less work that isn't comedy. Best wishes to you all. BIG thanks to the growing number of people showing love and enthusiasm for my work. Coming out to to shows, buying CDs and DVDs, sharing my posts on FB and my youtube videos, especially the super fans (Laura Kimball in the lead) who go above and beyond to help me make this thing happen. Quite honestly could NOT do it without you.
Posted by KLJ at 10:45 AM 1 comment: 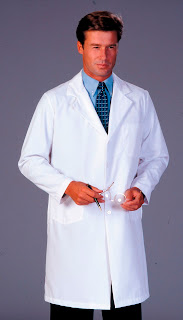 I was an assistant manager at a PetCo.
The manager pretty much let me run the store while she locked herself in the office and ran her other business. She sold dog sperm. She had prize winning dogs and people around the globe would order sperm to impregnate their own dogs, hoping for more champions. There was a special place where she took the pooches for an "extraction".

This was great because she was an awful person (as are most people involved in dog shows) and being left alone was ok by me.

It was also terrifying because it assaulted me with the knowledge that someone, somewhere was jerking off dogs for a living.

I imagine this person wore a lab coat. I imagine they were seen by other people, out and about in their lab coat and admired, lab coats implying smarts rather than good wrists and a gentle touch.
Posted by KLJ at 9:01 AM No comments: