And Romanian Comedy Site Aristocratii.ru, says "A great listen, all ending in a wonderfully crafted story that reminded me of Woody Allen’s stand-up."
Posted by KLJ at 9:55 PM No comments:

I was all set to publish The Atheist Survival Guide with American Atheist Press but Frank Zindler runs the publishing arm of AA all on his own and his health has not cooperated. He is not able to get the book done in the time frame I wanted and can not guarantee when it would be so he let me out of my contract.
I submitted a query letter to Prometheus books and heard back almost immediately.
So, now I have a newborn baby, a CD to promote, a day job, a weekly comedy show, a big show with Coexist Comedy Tour at The Crest which is also to be a concert film, and I'm getting my book ready. I didn't figure on Prometheus replying as quickly as they did so I hadn't done the edit/minor rewrite I feel needs to be done.
Life is crazy. I would probably be depressed and bored if it wasn't so no complaints. I hope Prometheus takes the book. That would be amazing.

WHAT! A NEWBORN BABY! Yeah, I didn't say much about that did I? No, it's not because I'm self absorbed and career obsessed (though I am on both counts). It's because I have a separate blog, keithlovesbryna.com all about that goodness. :D
Posted by KLJ at 8:33 PM 1 comment: 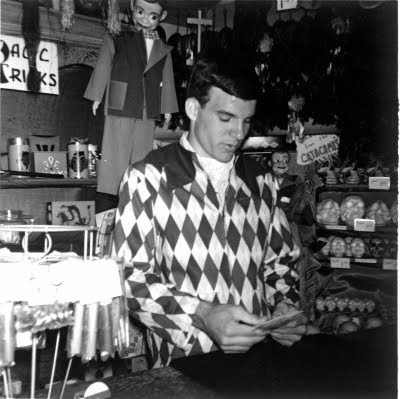 I was but a toddler making his first trip to Disneyland. It should have been the happiest day of my young life. I had on my little white suit, my arrow through the head, I was part of a happy group consisting of me, my Jehova’s Witness friend Suzie Jones and her many, many siblings. Mr. and Mrs. Jones chaperoned.

I'd grown bored of making hilarious balloon sculptures to entertain the Jones family (the Freud with a corndog is still one of my finest) and so I pulled out my banjo picked a few tunes and when a crowd gathered I told a joke or two.

This pathetic teenager was slouching outside the magic shop trying to draw people in with some stale jokes and tired old coin tricks. He witnessed all the hub-bub around my stroller and, coming in to get a closer look he realized I was everything he'd been looking to become. I managed to combine the finest of vaudeville with modern sensibilities and a so unhip as to be hip anti-hipness that made the hip post-hippy crowd adore me. Above all I was innocent. That's what they loved the most, my feigned innocence combined with the seemingly accidental wit of a Wise Man.

He cornered me and Suzie while we waited for her parents and siblings who were engaged in a vain search for sugar free beverages in the magic kingdom. This adolescent with "Hi, My Name Is Steve" pinned to his chest bought us a couple of corndogs and I showed him my shtick. From happy feet to balloon art. He took notes and kept saying, "Yes, Yes, Yes!" and then kissing the corn dog lady; Big sloppy kisses of the kind the world would witness years later in Prince's Purple Rain (By the way Prince stole that script from my cousin Paul, though Paul's version was about an airline stewardess who ran for congress and it featured more folk music. Believe it or not, it's up to you. I don't care.)

That bastard Martin's career has been non-stop ever since. He’s making awful movies for big money thanks to my material and I’m selling solar powered umbrella’s at a kiosk in the mall.

Now Steve's never going to admit to our little meeting. The only witnesses were Suzie and the girl working at the corn dog stand. Steve was sleeping with the corn dog girl, (and eating at her stand for free I should mention), and promised to sleep with Suzie when she came of age if she'd keep her mouth shut about his lifting of my gags. She maybe a good witness for Jehova, but she sure didn’t come through for me. Yeah, I know it’s a cheesy joke. Why would I write a good one when that bastard will just take it from me?!

Now I want you Steve Martin fans to know that although I'm mad at Steve for stealing my material when I was but a mere boy incapable of defending myself, I do love his comedy dearly. Of course I do, since it's really mine. So you see, in that sense I too am a Steve Martin fan, though I hate his lousy, stinking guts. Steve is one of my biggest comedy influences meaning I too want to steal all my material from a toddler.

Unless he agrees to "Settle" out of court for a reasonable fee.
Posted by KLJ at 10:10 PM 3 comments:

I have tried unsuccessful to resist being on the business/production end of comedy. I don't want to sell comedy I want to make comedy. I know comedians that have moved out of performing into producing and I didn't want to be one of them, but it felt like a good strategy as a performer; using the producer roll to put myself on stage more and with better acts.

I realized yesterday that while I know friends who moved into the producer role completely they weren't friends who I saw as good performers. I don't mean that in any mean spirited way at all, but if I saw one example of someone who really impressed and inspired me as performer and who lost it to producing I'd have reason to be scared. Since that isn't the case, I will continue to produce shows which gives me great contacts and puts me on great bills. I will trust that my talent is sufficient to make the most of these opportunities.
Posted by KLJ at 10:44 PM No comments:

It feels strange to put out the first press release for Coexist? Comedy Tour at The Crest. I've been away from Coexist for a bit and it was such a large focus of my life and especially my life as a comic for so long. Coexist makes me smile, makes me feel really proud. With Coexist I feel like I make comedy say something and I make dialog happen, dialog about free speech and about freedom of religion and about being friends and having fun with our differences. I guess I'm more proud of this than just about anything else I've done as a comic.

We've done it for two years and every time I feel that ceiling coming and worry about what we can do to take it up another level there is something there to take it to that next level and that something this time is that Larry Brand is coming to film it all for his documentary on atheists but he is taping the whole thing and as he put it, killing two birds with one stone. He feels like we are something special and worth being our own film and I of course agree.

So, I am excited as all hell and I feel like this is an important and big break for me and for this tour and with my daughter coming any day now the timing it certainly nice.

Now we just need to PACK this theater and I am sure that we will.
Posted by KLJ at 8:49 PM No comments:

It's interesting that the anti-gay, fundy religious folks are more obsessed with Sodomy than any of the gay people I know... and I know a-lot of gay folks... and not all that many fundamentalists.
Whenever I'm around these preachy types, I'm like, "You're thinking about my dick and my ass right now aren't you? Wondering what I get up to with 'em." It's sick I tell you, sick.
Posted by KLJ at 12:33 AM No comments:

Finally getting around to watching the Scorsese Bob Dylan documentary. Damn good stuff. Makes me feel lazy. Makes me wish I'd known what I wanted to do younger. I'm still figuring it out now, almost twice the age Dylan was when he released his first album. But I'm excited that my comedy is growing quickly. I'm getting very adept at the story telling direction that I've felt myself resisting ever since bombing a story on my first professional gig.
Life goes by a little quicker thank I'd like. It's not that I'm trying to stay young it's just that one age comes on before I'm quite done with the last. Jesus universe, what's the hurry?!
Posted by KLJ at 11:08 PM No comments:

It's not that I think I deserve fame because I'm funnier than Louis CK or Doug Stanhope. Those guys are obviously hilarious and deserving of their fame. It's just that I don't need to think all that highly of myself (for the record, I do) to realize that there are people who have exceeded far beyond just ditching the day job with far less talent than I have. I don't have to think I'm great to think I'm better than...
People who've undeservingly been famous in my lifetime.
Ron Jeremy - has a big penis.
Where's the Beef Lady- didn't know where the beef was, apparently never met Ron Jeremy.
John Bobbit - had his penis cut off, got a national comedy tour out of it. Knows where the beef is.
Dustin Diamond aka Screech - national comedy tour for, geeze I have no idea what for.
Glenn Beck - I could write a novel on this one.
Joe The Plumber- was in the right place when the right was desperate.
Palin - see above.
Larry The Cable Guy - Git 'er Done. I've been working on my clever "go to" phrase: "That's it. That was the joke, please laugh now." I think it could be my ticket in.
Vanilla Ice - Come on, I have the gun, there is a barrel of fish, really do I need to bother with this one?
Jim Baker, Tammy Fae Baker, Jimmy Swaggart, Ted Haggerty, Jerry Falwell, all the rest but NOT Benny Hinn who is the greatest mentalist of our time.

If you're wondering why I haven't posted more about my impending father-dom here it's because I post about it here: www.keithlovesbryna.com.
Posted by KLJ at 10:08 AM No comments: