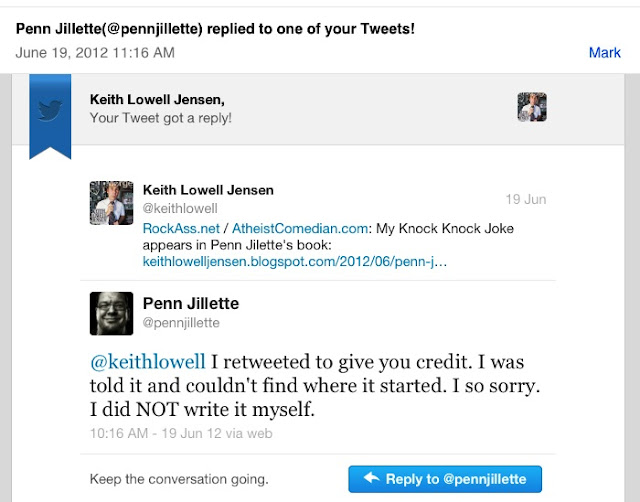 I posted about a joke of mine appearing in Penn Jilette's book. See that post here: Penn Jillette and My Knock Knock Joke
As you can see in the graphic above Penn replied and was cool as could be about the whole thing. He sent a second tweet saying he was really sorry. I'm good. One of the folks I respect and look up to proved worthy of that respect. Yay.
Posted by KLJ at 11:46 AM 3 comments: 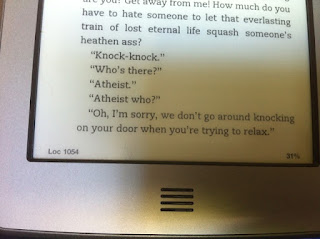 Yesterday my friend Simone texted me this graphic, a photo taken of her Kindle.
She wrote "Have you seen this in Penn Jilette's "God No!"? Did you write that joke?"

Well, yeah. I did write that joke. And since I perform regularly at atheist events, conventions, etc. it concerns me that people within that community might think I stole it.

It became a regular part of my set as I performed with The Coexist? Comedy Tour:

So did Penn Jilette steal the joke from me? I'd like to think no. I know it happens that people come up with the same joke. It happens all the time in fact. The wording is so similar though, from the "Oh, I'm sorry" right up to "When you're trying to relax." Could someone have claimed they wrote it and sold or gave it to Penn? I suppose its also possible that the joke has just circulated around and has become one of those standards which you assume you'll never know who wrote. That is certainly the case with most of the knock knock jokes I've heard over the years, like the brilliant Interrupting Cow for instance.

I've been a Penn and Teller fan for longer than I've been an atheist, and though I've disagreed with Penn on many things (him being a libertarian for one) he has always seemed to conduct himself with integrity and honesty and so, I will hold out hope that there is a reasonable explanation. I'm not trying to stir the pot, but like I said, I find it necessary to say that I did not steal the joke. I am also flattered. I know I wrote the joke, and now I know that Penn Jilette thinks its a good knock knock joke. So, I wrote a good knock knock joke, which is hard to do as it often feels like every knock knock joke has already been written. For now I will retire the joke. I have plenty of others.