Arguing with Libertarians About Apples

"I would like to ask you to answer this question with yes or no: "If If I pick apples and somebody comes and takes more than half (roughly 65% in my country) to help somebody else, is this ethical?"

How many apples are you picking? Are you being a greedy pig and picking so many apples that the rest of us are like, What the fuck? Where'd the apples go? Are you then selling your apples for prices that most of us can't afford and even throwing away some excess apples because you make more money selling a few at high prices than you would by selling all of them for a reasonable price and you can't give away the extras lest you devalue your apples which as I've said are now CRAZY valuable because such a small minority control the apple market?

Is that whats happening? Because in that case my answer is YES. Totally ethical.
Posted by KLJ at 12:19 PM 8 comments:

I'm looking for someone to help me produce Atheist Church. I have over 5,000 youtube subscribers but I'm not having time to keep up with what was a weekly show for the first two years.
I have a nice camera, a Cannon GL2, though unfortunately it does use MiniDV tapes where I'd prefer to go digital.

What I'm looking for is someone to operate the camera, help edit and upload and someone with the technical know how to help me record Skype interviews with atheists of interest around the globe and to do live video chats as well.

What I can offer is a share in the youtube ad revenue, which at the moment is not much but I feel very strongly that it could be much more. And of course you'd be fully credited.

I got off to a great start doing just an amateur vlog type thing but I think we can take this think up a notch and really make it into something special. 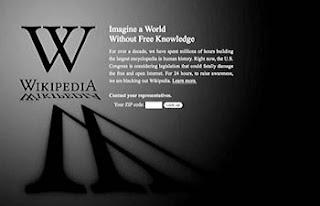 Yesterday I went 24 hours without the Internet in support of the Black Out to protest SOPA. It was an amazing thing to be part of with major websites like Wikipedia and Craigslist going dark for the day and even Google giving a nod of support. I kept notes throughout the day.

6am: Phone alarm woke me up and I immediately reached for phone so that I could look at google news while doing my important morning business in the bathroom, then I remembered no Internet today.
Looked at phone again, saw green blinking light indicating I had new messages on GMail, was reaching to check, oh wait, no Internet today.
Looked at the time, I’d been awake for less than 5 minutes. I’d reached for the Internet twice.

7:40am Peaked at newsstands on my walk to work, Newsstands were empty. Dammit.
Thought about texting comedian friends who I knew would be sleeping. Seemed like it would be funny and would give me some of the human interaction and idle chatter that normally fills my day.

8:10am Muscle memory wants to type or touch a screen. I decide to play bejeweled. It’s on my phone already, no internet. I open it up and realize it’s a conduit for advertising… from the internet. That’s why its free. No Bejeweled.

8:30am Thinking about how to get to my 1st appt. of the day. No Google maps. Does phone GPS use internet? I know it uses satellite but I’m not sure if it utilized the internet or not. I wish I could look it up. I’d ask my friend Ian. He knows about this kind of thing… but the only contact I have for Ian is via Facebook or email.

8:35am Radio would be nice. I don’t have one at work. Normally I listen via the internet. Can’t wait to go to appt. so I can listen to the news in my truck. I’m sure they use the internet in many ways to broadcast but I will just be listening via an old fashioned antenna.

8:45 I find some music saved on my hard drive. My goddamn Windows Media Player won’t play it unless I update which involves using the internet. I’d use a different player but I don’t have one on this computer and to download one WOULD INVOLVE USING THE FUCKING INTERNET. MY BOSS IS WALKING AROUND SINGING SMASHING PUMPKINS AND NOT EVEN GOOD SMASHING PUMPKINS BUT SHIT OFF OF MELON CHOLLY AND THE INFINITE SADNESS OR WHATEVER THEIR DOUBLE ALBUM OF WHINY BULLSHIT IS CALLED! Damn, I hope SOPA don’t pass. I don’t want this suffering to be in vain. Sure, you think I’m being melodramatic. I’ll record my boss singing, then we’ll see who is being melodramatic.

Texted comedian friend Johnny Taylor. “I miss the internet” “Entertain me monkey” “First read me the news” “Then sing me my favorite songs” It’s been five minutes and he has not replied.

I want to go on Facebook just to see who is on Facebook though I wouldn’t be able to call them out for being on facebook lest I reveal I also am on Facebook so I’ll just stay off of Facebook. I remember opening my eyes during church prayer to see who else had opened their eyes during church prayer. I think this is how atheists find each other at church. WAIT! Have we left the internet to the conservatives for 24 hours? Good thing they don’t really understand it that well or that might be a problem.

8:50 Am I NON-Live Tweeting the BlackOut? Can’t wait to blog this, but I will.
Johnny Taylor must still be sleeping. Asshole.
Johnny texted back: What did we do before the internet?
Me “I don’t remember.” “Was there something called sex?” “That’d be hilarious if a new population explosion starts today.” “”I guess we’ll see in 9 months”
Johnny: “I’m not familiar with this sex of which you speak”

8:55am I wonder if criminal types will take advantage of a large number of people being offline?
Text from Johnny: “I already forgot about the blackout and checked my facebook. I’m terrible at protesting”
Me: “What did you see? What’s going on? Tell me everything?!” “Any hot girls post new profile pics?”
Johnny: “I got poked by a couple of people. My old friend Sam Starks sent me a message. People are talking SOPA and the reddit and Wikipedia blackouts. Laura Kimball posted about it.” “I think so. Its bound to happen.”

9:10am
Me to Conservative Boss: So what do you think of this black out thing?
Boss: Why are they doing it?
Me: There are bills in congress that would give Washington power to censor the internet.
Boss (Sarcastically): Oh, who did that? Bush?
Me: Dude, I don’t blame everything on Bush nor do I think Obama is anywhere near perfect, but Obama has come actually out against it.
Boss: Then why worry? He’ll just veto it.
Me: Can’t take that chance, and fuck congress for even considering it.
Boss: Why don’t you just do what Obama does and blame Bush?
Me: I haven’t heard him blame Bush for anything that Bush didn’t actually do. Bush did crash this car.
Boss: But he didn’t total it.
OH MAN, I’m talking to my boss. That’s not a good idea. How desperate am I? Goddamn I need you internet!!! Calgon.com take me away! (That’s a joke for old people. Even older than me.)
Remembered I have a CD that Kepi Ghoulie gave me. Oh thank you Kepi!
Singing along: “She’s got a brain scramblin’ device and I feel it in my he-e-ead…”

9:22 Thought about sending Kepi a note to tell him how much I’m digging this album… then I remembered. I’ll send him a note tomorrow.

12:25 Went out, listened to radio, NPR, was excited to hear the black out mentioned Got interested in a story on the West Memphis 3, had to sit in truck to hear it since I wouldn’t be able to pull it up on the computer.
Phone keeps telling me I have emails. Should’ve turned that off yesterday. I keep thinking about what emails I might have. Is a festival writing to tell me I got in? Is someone offering me a last minute booking that they need filled right away? Is Conan O’Brien writing to ask if I can come do his show and maybe hang out, go to Disneyland, do some writing? Most likely I’m just getting spam emails from progressive lists I subscribe to telling me about the black out.

I hope tonight’s show does well. I don’t know how important “day of” reminders are. We’ll see. Super impressed with Wikipedia. I think a small donation to them will be one of the first things I do when I get back online. I’ve been meaning to send them a few bucks for awhile but they really stepped up on this one.

12:45: Listening to Phenonomnauts CD given to me by the band when we did an atheist event together. Ah CDs, will anyone romanticize them the way tapes and records are romanticized? The overlap between pining for records, and CDs starting towards obsolescence may be enough to push them into the dustbin of history without a lot poetry being written on their behalf. Enjoying the Phenomonauts. I hope I remember to drop ‘em a line tomorrow.

Maybe I should make a “to do” list for tomorrow? Maybe I should write it on a sheet of tree pulp like in the old days. I’ll need to find one of those ink straws.

1:29 Oh Jesus H. Christ office life is boring without the internet. I always say that the internet was the death of American productivity but maybe it actually makes sitting at a desk all day tolerable. I AM SO BORED I MAY HAVE TO PLAY MINESWEEPER!

1:49: Minesweeper 35 seconds. If I ever do this again I’m making arrangements for music.

3:05 I got the Velvet Underground to play through Spotify. Spotify is probably accessing the internet but the files it’s playing for me are stored locally on my machine and I’m not looking at the Spotify player. Cheating? Probably.

6:19pm Text from my brother “They are giving out free boobs on the internet quick go on”
Me: “liar”
Brother: “Whatever I am literally surrounded by boobs”

7:30 The venue is empty except for comics. Seriously, is a day of post on Facebook that important?

8:00 Crowded room, nice. Audience was just late. Who needs you internet?! The night’s headliner Jason Resler makes a few comments on the black out. I think that most of the crowd has no idea what he’s talking about.

10:15pm, I try to rationalize that I got offline more than 24 hours ago so its okay to take a peak at my email and facebook before turning in. I decide that having one full day, one full waking cycle, without the internet is good for me. Its more of a personal thing at this point. Off to bed.

1/19/12 6am INTERNET!!! OH INTERNET! I’VE MISSED YOU SO! What wonders do you have for me today? Hmmmm. Kind of boring. Oh well, Pandora, play me some music. Hang on Spotify, I’ll get to you…