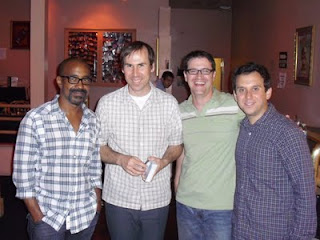 I just realized I was so busy with my CD release show I never blogged about my week opening for Tim Meadows at Punch Line Sacramento. It was great. I was really happy with my set each night and so was the audience. It was great fun flyering after the show and getting tons of compliments from enthusiastic hand shakes from folks.
Meadows did a bit of stand up and then brought up Uncle Brother, two improv guys from Chicago and he joined them in some of the best long form improv I've seen. Meadows and the Uncle Brother guys were all really nice and friendly.
This week I'm back at Punch with Tom Rhodes which should be a blast. The man is a legend.
Posted by KLJ at 12:44 PM