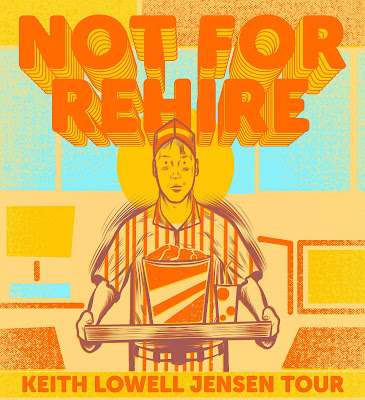 "He’s a brilliant storyteller with so much heart and wit that the Washington Post called one of his shows “A work of Demented Genius.
Jensen developed a show of material based on his misadventures as an employee of fast food restaurants, office jobs, a golf course, and many more weird gigs. Jensen’s string of odd jobs left him underpaid, overworked, punched, insulted, deep fried, and targeted by duffers at the driving range. The highlight reel of “30 jobs before his 30th birthday” weaves and culminates in the story that put Jensen on stage for the first time."
Capital Public Radio February, 2019

In February of 2019, 800 Pound Gorilla Records will record Not For Rehire live at Folsom Lake College, in Folsom, California. This will be KLJ's 6th album of original material.