I have a problem with the FB app on my Android phone. It keeps linking new posts with events even days after they've passed. So yesterday I remember that I'd snapped a selfie while sitting on the toilet and I decide to post it with the caption "Pooping" because I'm classy like that. Just a dumb Facebook joke. But my damn phone strikes again and... 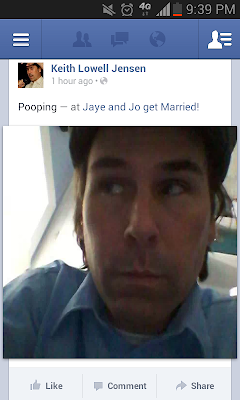 I'm "Pooping at Jaye and Jo get Married."

I have a lot of friends from many different parts of the country and from many different political stripes and most of them are cool with marriage equality, otherwise we probably wouldn't be friends, but many of them don't actually know any gay people and aren't likely to be attending a marriage of a same sex couple anytime soon. So, they look at my posts and they get a peak at a world that is foreign to them, and now they associate it with pooping. Oops. Sorry. I'm a pretty poor choice for ambasador.

For the record. I did NOT poop at Jaye and Jo's wedding. They got married in a park and I'm not too big on public bathrooms but especially public bathrooms in parks. I pre-pooped. It was a lovely wedding though, and again, congrats to the couple.

Wow. You're kind of funny. Maybe you should be on TV or a comedy or something like that.