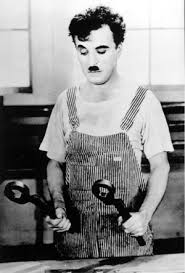 Rewatching this Chaplin masterpiece with my nephew. I'm explaining to him the historical context so he'll understand the scenes dealing with strikes and worker's marches and the many scenes of people worrying about having enough to eat. "No, those aren't bad men. They don't want to steal, but they're starving. That's why he's crying." Pretty heavy stuff to be explaining to a 9 year old.

Chaplin's socialist leanings are not subtley expressed here; Modern Times is as much a propaganda film as it is a comedy, but it works brilliantly on both fronts.

Amazing that this film is so funny while dealing head on with such subject matter. This is comedy at it's best.

I can't wait to crack open the bonus disc which features several documentaries including a 1967 short capturing the reaction of peasants in Cuba seeing their first movie ever when a travelling projectionist shows them Modern Times. There's also a promotional musical film commissioned by that king of the assembly line, Ford himself. That should be pretty funny.

Email ThisBlogThis!Share to TwitterShare to FacebookShare to Pinterest
Labels: reviews