Bill Maher Is Coming To Sacramento 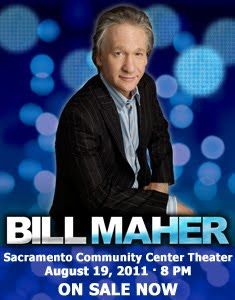 Who can NAME his show Politically Incorrect and still manage to get cancelled for being politically incorrect? That's our Bill Maher, and I love him, even when I disagree with him which does happen. Seriously Bill, anti-vaccination?

His show being canceled only seemed to push him more to speak his mind honestly and he started carrying the atheist banner loudly,  as loudly as anyone with his level of fame, getting his feature documentary Religulous into wide release.

And of course he is back on television with Real Talk, as brazen and outspoken as ever.

50 bucks?!? I hope he lets me in on some secrets about how to have an extra 50 bucks to go do fun things.