Give me Convenience or Give Me Death 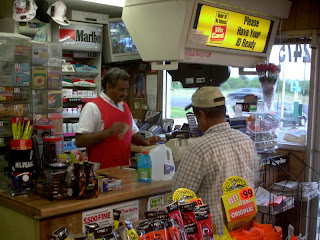 Convenience stores, for your convenience, offer the things you need most in one small location on a corner close to your home. It says a lot about a culture what items they appreciate having handy, what items it's convenient to get in a hurry.

What are our top shopping priorities?
If  you're going to have a store that sells just 7 items, that's them there. Be sure you sell lots of energy too. People need energy to handle all that porno. Energy is really just sugar but it says the word energy on it.
Also, be sure to have one small section where you cram together some canned peas, cat food, diapers and feminine hygiene products. These practical items help justify all the other stuff and when people consume enough of that other stuff they may settle for your decades old maxi pads and a can of peas rather than drag their ass all the way to the big store, even after slamming a couple of cans of "energy."

These stores are often run by immigrants and I often hear lazy, sloth like white people complain about said immigrants "taking our jobs." This amuses me to no end, which is why I tolerate the company of lazy, sloth like white people; I need the material. I certainly won't fight any immigrant for the right to work 6am to 2am manning the counter at my very own convenience store. When do they sleep? Sometimes while they're helping us admittedly but I don't mind nor do I envy them.

He answers "Excuse me? I clean every day."

"Yeah, yeah, but they're still filthy... those magazines there, they're so dirty."

"No, my whole store is very clean. Always I clean."

"Uh... yeah, sorry. Can you hand me the latest Swank please."

"Hey, I see you got Karma Sutra incense." Silent stare. I continue, "Uh, yeah. Heh, heh, you see the thing is, looking at this picture is pleasant to me, you know visually. Pretty sexy stuff. I like it. And I can imagine what this little scene on the front would sound like. That's alright. I'd put that in my iPod. But this is incense and I have to tell you the last thing I want my living room to smell like." More silence, but do I give up? Of course not. "Indian gymnast orgy is not really what I'm going for you know what I mean?"

The next time I stop in to the shop I just need a Coke to give me some of that energy you hear so much about so I can drive to a show. I grab a cold can and it's $0.89. You pay for convenience. My friend at the counter is talking on the telephone, probably dialed as soon as he saw me come in so he could avoid talking to me. I slap down my iconic red and white can and hand him a ten dollar bill. As he hands back my change he says the first and only words he's said to me since I got there.

I smiled. His look turned to one of disappointment. Apparently he'd had some hope that I might be better than that. I took my coke and left.

When I walked in a few days later with a hearty "Hi Buddy!" the keeper of convenience suggested I might want to go the extra block to shop at Safeway. I was flabbergasted. He didn't want my business? "Yeah, well, that's fine. I don't need your overpriced Cokes anyway."

"Then it works out for us both." he countered from behind the counter.

"Yeah. Well, I'm a stand up comedian and I talk about you in my act." I was determined to win now. He'd bruised my ego so, like a wounded animal, I struck back. Well, like a wounded, nerdy, animal.

"What do you say about me in your act?" he asked, putting an emphasis on "act" as if to imply quotes.

Ha! He was taking the bait. I told him every story I just related here. He did not seem taken back in the way I'd hoped and then he responded, calmly, "But... you are the asshole in every story." with the emphasis now on "asshole". I think he even through in a bit more accent than he normally has so to make his insult cute. The two cute college students who were patiently waiting to buy their "Go Girls" giggled.

I was desperate. I went from wounded nerdy animal to snake under tire lashing out, pointlessly as it dies a slow and certain death. Parked in front of the shop I saw the Hummer which frequently transported flats of my beloved cola cans from Costco to this very convenience store. "Hey, Nice Hummer!" I yelled from where I now stood on the sidewalk just outside the store. "How do you explain to the folks back home what you're driving? 'Hello Mom. Do You Remember The Car That Ran Over Our Village?'"

I saw the baseball bat coming out and I took my leave, oddly and temporarily satisfied. I shop at Safeway now. And I quit drinking Coke.
Posted by KLJ at 4:01 PM